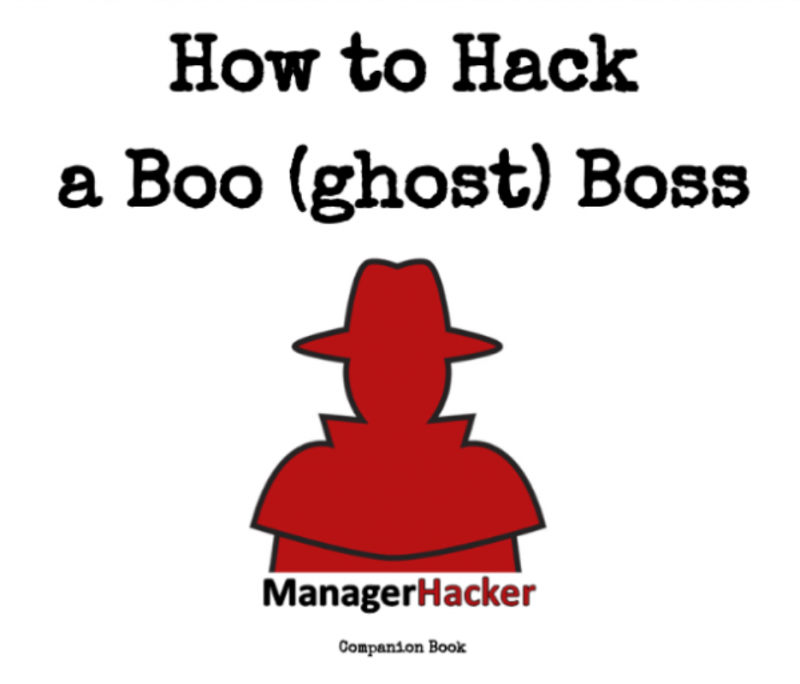 How to Hack a Boo (Absent) Boss PDF (Active)

A Boo Boss aka the Ghost Boss is a hellish management style because since you don't see them very often, and if you don't communicate enough by text, email or talk on the phone, you can become extremely disconnected. What to do, what to do?

👻 For some, a Boo (ghost) Boss is the kind of manager whose office is just a stopover in between personal errands, international offices, unscheduled lunch meetings or unannounced check-ins. They say they're not out to get you or catch you sitting on your ass, but you always have the feeling that your ghost boss is close by, flying through the air ready to uncloak at any moment.

👻 Extreme Boo Bosses rarely respond to emails, texts or calls because no matter how urgent your request is because they know that if they reply, you might find out they're in a bar somewhere slacking off. Those that respond slowly will always have a reason for their delay whether it be they were on a plane, in a different time zone or suffering jet lag.

👻 You will know that you have a Boo Boss because when you ask them a specific question about a project that you're working on, they reply with some off-the-wall suggestions or ask you what you recommend is the best solution.

👻 Sometimes you will find a Boo Boss hanging out in a back office somewhere where they won’t be caught playing computer games, or they're just avoiding day-to-day operations because they're either freaked out or bored to death.

👻 A Boo Boss is usually very businesslike, cordial and doesn’t have a very good sense of humor because they like to hang out alone. Oh yeah, they talk to people, but it’s a superficial conversation that is usually all compliments about their dog or their children. On the surface Boo Bosses are nice, but they will never let you get to know them.

👻 Disconnected managers aren’t necessarily dysfunctional “per say.” They may be disinterested, but sometimes it’s more likely they were transferred and are upset. There are thousands of reason they hang back. You have to find a way to get inside their head to figure out what motivates and demotivates them. You want to find a way to support them in getting what they want.